Seed Company Catalogs Over the Years

Posted on February 12, 2012 by prairieyesteryear

After Christmas, gardeners began receiving nursery seed catalogs.  Most of us can recall our parents or grandparents receiving catalogs from such familiar names as Burpee, Henry Field, Gurney, Shumway, and Stark, to mention only a few.  The colorful pictures of mammoth vegetables or beautiful flowers helped us to forget the frigid temperatures outside as we looked forward to spring.  Many years later, some of us are still receiving those same seed catalogs and visualizing productive gardens next summer.

David L. Landreth started the first seed company in Philadelphia in 1784, and he printed what is believed to be the first seed company catalog in the U.S.  Still in business today, the Landreth Seed Company introduced zinnias to the U.S. in 1798 and the first truly white potato in 1811.  Americans began to grow tomatoes after the Landreth Seed Company advertised tomatoes as the “love apple” in its catalog in 1820.[1]

Many of the well-known nurseries in the Midwest began in the nineteenth century, a time when newly arrived pioneers sought more and improved seeds, both for flower and vegetable gardens.  Stark Brothers Nursery started in 1816 when James Hart Stark moved with his young wife to Louisiana, MO, bringing with him a bundle of apple scions that became the start of his nursery stock.  Although the Stark family sold their interest in the company a few years ago, the present owner has connections to the Louisiana area, and long-time Stark employees are part of the Stark Brothers Nursery which today continues almost 200 years of operation.  (The original two-room log cabin of James Hart Stark can be viewed at the Pike County Museum.)[2]

Charles W. Gurney began his first seed company in 1866 in Monticello, Iowa eventually moving to Yankton, SD by 1894.  About the same time Henry Field began his seed company in Shenandoah, IA in early 1890s   Henry Field ran his own printing press producing a small four-page catalog in 1899.  Both Gurneys and Henry Field Seed companies ended up being sold in 1999 to Foster and Gallagher, a marketing company which went into bankruptcy in 2001.   Gurney’s and Henry Field were then sold to Scarlet Tannager Holdings with headquarters out of Indiana.[3],[4]

Many of us are familiar with the R. H. Shumway catalog with its vintage looking illustrations.  R. H. Shumway began his seed company business in Rockford, IL in 1870.

Another Midwest seed company is J.W. Jung which began in 1906 in Randolph, Wisconsin by printing 400 black and white catalogs.  Later Jung upgraded to a Chandler and Price cylinder press by 1909 with which he printed 10,000 catalogs.  Jung’s was the last major seed company to print its catalog in-house and continued to do so until 1987.  Today Jung’s prints about 3,500 copies of its spring and fall garden seed catalogs.  Jung’s is celebrating more than 100 years as a family-owned  business.  The R. H. Shumway Company also is in business, but now it is owned by Jung’s with operations in Randolph, Wisconsin.[5],[6]

As rail transportation improved after the Civil War, seed companies found it was cheaper to print and mail their catalogs.  In 1863 free postal delivery was available in cities and in most towns.  By 1896, rural free delivery was extended to rural areas (although it would be the early 1900s before some areas would actually get free rural delivery).  Most of the catalogs were free upon request.  By the second half of the nineteenth century, color was used in some illustrations, but the majority used black and white illustrations.   Lithographs were prepared by talented artists to illustrate the garden products , especially from 1880 to 1910, considered the “Golden Age of Seed Catalogs.”  By 1910 lithographs were being replaced by more fashionable color photography.[7],[8] 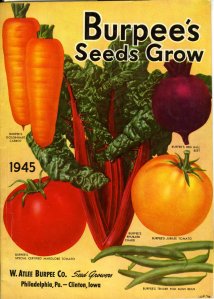 W. Atlee Burpee, in 1878, established his seed company in Pennsylvania, mailing a 48-page catalog.  Burpee researched and experimented with seeds, and he was the first to hybridize vegetables.  Burpee believed in advertising with the catalog, and the 1891 catalog was the first to use engravings made from photographs.  This changed the mail order catalog industry from hand-drawn illustrations.    By 1915 Burpee was the largest seed company in the world, mailing a million catalogs.  In his first year of business, his catalog was 48 pages, but by 1915 his catalogs were 200 pages and he distributed a million catalogs.

After growing flowers and garden products in Glyn Ellen, Illinois for some years, George W. Ball, Sr. founded the Ball Horticultural Company, Inc. after 1905.  The Ball Horticultural business grew over the years, and from the 1960s the Ball and Burpee companies were associated in various ventures.  The Burpee company merged with George J. Ball, Inc., in 1991, but Burpee was spun off as a separate company in 1995, with George J. Ball, Jr. as the President of Burpee See Company.  Today Burpee continues as a major vegetable and flower seed  company.[9],[10]

What is the future of seed company catalogs?  Some companies have discontinued printed catalogs and have switched to online catalogs to reduce paper, printing, and mailing costs; however most of the well-known companies continue to print and mail the catalogs we enjoy so much at this time of year.

–Contributed by M.
Originally Published by the author in the January 13, 2012 issue of The Windsor Review

[7] Alice Krinsky Formiga, “A Short History of the Seed and Nursery Catalogue in Europe and the U.S.,” Special Collections, Oregon State University Libraries, “About the Collection,” http://osulibrary.oregonstate.edu/specialcollections/omeka/exhibits/show/seed/introduction.